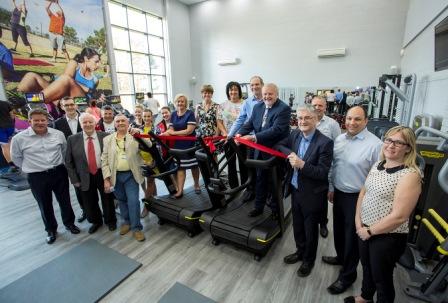 Picture BY STEWART TURKINGTON of www.stphotos.co.uk

The new centre includes a state of the art 50 station gym for members, two studios and a spinning studio, as well as a 3G football pitch, floodlit tennis and netball courts, and an eight court sports hall available for general hire outside of school hours. The centre is linked to Bohunt School in Arborfield Green, who will have access to some of the facilities during school hours.

The new centre is located in the former Arborfield Garrison major development location, and is part of the council’s planned improvements at its centres as part of its wider leisure strategy. Ryeish Green Leisure Centre is also set to open later this year following extensive investment in new facilities.

The floodlit 3G football pitch, which can accommodate 11-a-side, 9-a-side, and 7-a-side, opened back in October 2017 and has gone from strength to strength since then with more than seven clubs, including rugby clubs and even ultimate Frisbee, now using the pitch on a regular basis.
“This is a fantastic modern facility, which I hope both residents and pupils at Bohunt School will be able to enjoy for years to come. It’s great that we are able to invest so much in improving our leisure facilities with two more new centre’s planned and the new Sports Hub at Ryeish Green due to open this summer.” said Cllr Norman Jorgensen, executive member for environment sports, environmental health, leisure and libraries.