Broad Street Delayed Opening – The challenging underground conditions revealed by work on the Market Place Improvement Project has led to an unavoidable delay in the reopening of Broad Street. 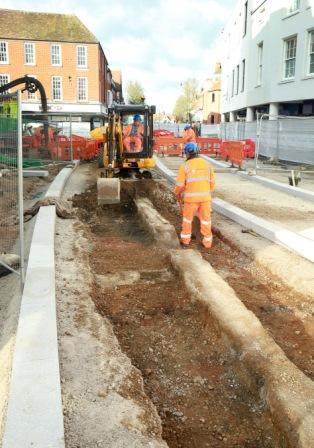 The road was due to open at the end of this month but the volume of issues underground that have needed to be repaired and rectified has, unfortunately, meant this needs to be put back. The road is now expected to reopen during March.

Among the issues discovered are:

Senior managers at both Wokingham Borough Council and Balfour Beatty are working together to do everything possible to minimise the delay to the works but, as everyone would expect, these problems cannot be ignored if the Market Place is to be finished to the highest standard. This is a refurbishment that will last for many years and it must be right for the town and everyone who uses it.

Wokingham Borough Council and Balfour Beatty are also working very closely to determine what impact these current problems are likely to have on the overall completion date. Progress is still being made on the main area of the Market Place and this will continue in tandem with the work on the Broad Street side. Information about this impact will be released as soon as possible.

Wokingham Borough Council executive member for strategic planning and highways Cllr David Lee said: “Balfour Beatty has uncovered an underground spaghetti junction of pipes and, to be frank, generations of poorly laid pipework and other major problems. All these need to sorted out before we can put down the high-quality stonework that is going to make Wokingham town centre look so great.

“This has been frustrating and we completely understand that drivers and residents are going to be bitterly disappointed by the delays, but we are fixing generations’ worth of underground issues in what is an old town centre and need to take the time to get this right.

“We are working with our contractors Balfour Beatty at the highest level to get the issues resolved as quickly as possible.”

Wokingham Town Council Mayor and Chairman of the Market Place Working Party, Cllr Peter Lucey said: “While the delay is deeply annoying, we understand that the underlying utilities need to be renewed. Yet from our office windows we can already see our new Market Place layout emerging. We appreciate the current difficulties but our Market Place is being transformed into an attractive, configurable space with stylish York stone paving and beautiful trees in proper tree pits. A central space designed for us all that can be used for café tables, market stalls and a multitude of other community uses.”