Visitors to California Country Park will notice a change to their surroundings with a new boardwalk across the longmoor bog. 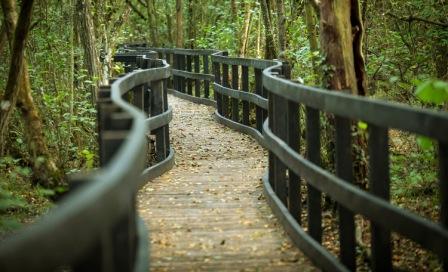 The new 200m long boardwalk replaces the previous timber structure dating back to 2005, which had come to the end of its life as a result of rotten and weakened timbers as well as recurrent vandalism. It was officially opened on Friday 12 October by executive member for environment, sports, environmental health, leisure and libraries, Cllr Norman Jorgensen.

The project to replace the boardwalk, which cost £88,000, has been funded by Wokingham Borough Council and Finchampstead Parish Council, who donated £25,000 towards it.

The unique flora and fauna found in the 8000 year old bog makes the longmoor a nationally important and popular trail with visitors, and as such it was decided a more durable material was needed to ensure visitors could continue to access the trail for years to come. 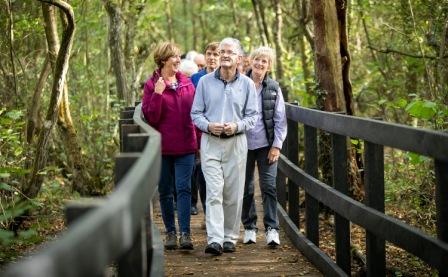 Cllr Norman Jorgensen, executive member for environment, sports, environmental health, leisure and libraries said, “Despite previous attempts to repair, it was clear that the old boardwalk was in need of replacing. The new durable structure should bring years of use for visitors to enjoy the beautiful trail. Thank you to all involved in this project.”