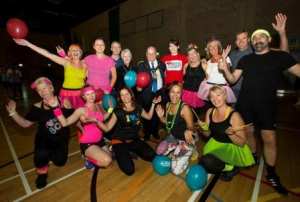 The event raised £340 for The Brain Tumour Charity, and was supported by Tesco’s Wokingham and 1Life Leisure and Wokingham Borough Council’s sports and leisure team.

Instructor Tracy Dance put the group through a one-hour session of the infectious Latin American beats and Wokingham Borough Mayor, Cllr Rob Stanton, joined in with the fun.

Wokingham Borough Mayor, Cllr Rob Stanton said: “Congratulations to everyone involved in organising the evening and it was fantastic to see so many people enjoying the exercise and having fun.”