Cllr Rob Stanton has been elected as Wokingham Borough Mayor 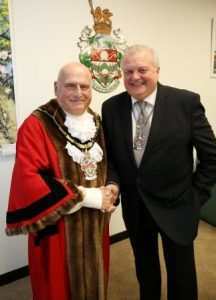 Cllr Rob Stanton has been elected as Wokingham Borough Mayor at the annual Meeting of the Council held on Thursday (May 18).

The Mayor is officially the ‘first citizen’ of the borough and has a civic role, representing the council and the people of the borough, as well presiding over borough council meetings. Unless Her Majesty the Queen or her representative is in attendance, the Mayor takes precedence over any other dignitaries attending events.

Traditionally, the Mayor chooses a charity to benefit from fundraising during their year in office. This year Cllr Stanton has chosen to support two charities: the Royal Berkshire Hospital Cancer Care Unit and Dingle Promise.

Cllr Stanton said: “It’s an honour to be appointed Mayor of Wokingham Borough which I moved to in 1990 and was fortunate enough to bring my two boys up in. To be considered the first citizen is an amazing privilege and I will do my best to honour that status.

“I have decided to support two good causes in my year in office. The first is to support the Royal Berkshire Hospital Cancer Care Unit, who treated me for cancer and many Wokingham Borough residents. We all know how hard it is for the NHS to have enough funding and I want to use this year for us to show our support for the excellent work they do. I also intend to set up a voluntary cancer champion group to support patients when they leave hospital in the period following their discharge, which is such a tough period for both the patient and indeed the families.

“The second charity I have chosen to support is Dingle Promise that supports children with special educational needs and aims to give them the best possible start in life.”

Cllr Stanton was born in London and grew up in Chiswick before moving to a number of places, including York, Brighton and Wrexham, North Wales where he met Maureen who he married in 1975. After retiring as a retailer with WHSmith after 38 years, Cllr Stanton was elected to serve the ward of Finchampstead North, the ward in which he now lives. In his spare time, Cllr Stanton enjoys gardening, travelling at home and abroad, and can often be found cheering on the blues at Stamford Bridge, “another fine year!” he added.

Cllr John Kaiser will serve as Deputy Mayor. Cllr Kaiser is ward councillor for Barkham. He has been a councillor since 2011 and has served on many committees in addition to carrying out the role of executive member for highways and planning. In his spare time, Cllr Kaiser enjoys sailing and volunteering for the National Trust. Cllr Kaiser has also been a parish councillor for over 10 years.