A road in the new Eldridge Park development, close to Wokingham town centre, has been named after former town centre manager and long-time charity stalwart John Bingham.  Mr Bingham, who passed away in 2015, was a long-standing member of the Wokingham Society (including many years on the executive committee, five years as vice-chairman and editing its newsletter), one of the organisers of the Wokingham Winter Carnival and a committed supporter of numerous charities. 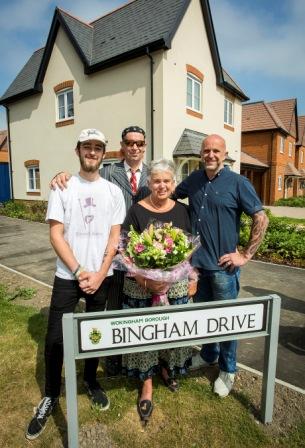 Peter Must, chairman of the Wokingham Society, said: “We are delighted to see this new road, close to where John and Jane once lived, named after our much-missed colleague. We treasure the time and energy John devoted to the society and to the well-being of the town, but we also recall, just as much, the irrepressible humour he brought to everything he did, not least the jokes with which he lightened the pages of the society’s newsletter.”

John was involved in many aspects of Wokingham life, as well as his voluntary activities, he ran a restaurant, Lucan’s bistro, in Peach Street until 2000 and acted as part-time town centre manager for four years. He received the Civic Award from Wokingham Town Council in 2005 in recognition for his contribution to the town.

Cllr Anthony Pollock, executive member for transport and highways, said: “It is lovely to be able to honour such a long standing volunteer who put so much energy into the town as Mr Bingham in this way. We work closely with the town council and local organisations such as the Wokingham Society to ensure that new street names reflect local history and heritage and it is entirely fitting that Mr Bingham joins those recognised in this way.”

Andrew Saunders-Davies, chairman of Berkeley Homes said: “It is a great honour to be able to recognise Mr Bingham at our Eldridge Park development. In this way, residents of Wokingham will be able to honour his memory and future generations will continue to have an understanding of the great work that he has undertaken in the community for many more years to come.”

Eldridge Park is one of the latest developments within Wokingham currently underway and is being built next to 25 acres of new nature park.