Hurst residents will be able to make the most of their open spaces following the installation of a number of kissing gates on popular walking routes around the parish.

Four existing stiles have been replaced by gates around the village of Hurst near to Lines Road and Dunt Lane to allow better access to local footpaths for walkers. The project has been funded by Wokingham Borough Council and the Ramblers’ Association. 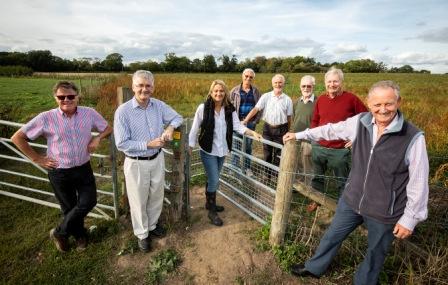 Persuaded by the local Ramblers’, the land owner John Belcher who owns Hatch Gate farm, kindly agreed to the gates going in on the footpaths across his land.

“This is a great project working with the Ramblers’ and the local land owner to encourage better access to the local rights of way. It means walkers of all ages and abilities will be able to enjoy the countryside around Hurst village” said Cllr Norman Jorgensen, executive member for environment, sports, environmental health, leisure and libraries.

Steve Vale from the Ramblers’ Association added: “We’re planning to replace three more stiles with gates in Barkham parish next year and we’ve already replaced stiles in Finchampstead and Wargrave parishes. We want to make the network easier to use for walkers.”

As set out in Wokingham Borough Council’s Rights of Way Improvement Plan and with the agreement of landowners and support of the Rambler’s Association, the council is hoping to replace every stile in the borough with these more accessible gates.