Mayor Roll Of Honours This Month

A community stalwart, charity volunteer, and town councillor have all been officially recognised for their outstanding commitment and contributions to the area in the second presentation of Wokingham Borough Mayor’s Roll of Honour.

Steve Bowers, Wallis Ferne, and Tony Lack were given their awards by Borough Mayor Cllr John Kaiser during November’s full Council. Tony was a winner from September but couldn’t attend that meeting. 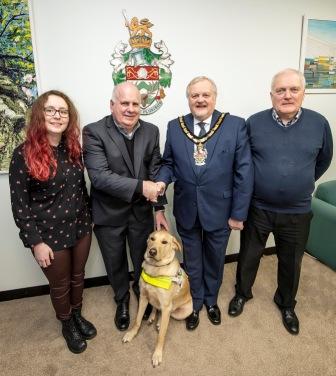 ‘Wallis Ferne, 22, volunteers at the Me2 Club.  By using the unique skills and knowledge learnt from her own experience of autism and development coordination disorder, she has been able to help other young people and inform fellow volunteers. One of her successes has seen her ‘matched’ to a six-year-old, also with autism, enabling the little girl to attend gymnastics club. She also volunteers at the Thumbs up Club at Addington School, Swallowfield Pre-school, and the Thames Hospice shop in Wokingham.

In addition to sitting on civic committees and a full-time job, Wokingham Town Council councillor Tony Lack also represents the Town Hall with the armed forces and cadets. In addition to this, he works with local schools to educate children against graffiti but also gives up his evenings and weekends to remove it from the town centre. This includes everything from simple cleaning with graffiti wipes, pressure washing to fully repainting an area.

“Steve, Wallis, and Tony go above and beyond to help others. We’re all indebted to them. Their unselfish dedication improves all our lives,” said Cllr John Kaiser, Borough Mayor. “Any Borough resident can be nominated for the awards.  They could be foster parents, volunteers, carers. For children and young people, we would like to hear about those who’ve overcome adversity.”

To nominate someone, simply email the mayor’s office: mayoralsupport@wokingham.gov.uk, and in no longer than 200 words set out why that person should be considered for the award. For the children’s awards, outstanding achievements in sport or arts are considered. But you must be a Borough resident to make a nomination.

Cllr Kaiser and his deputy mayor Cllr Bill Soane will select winners from the nominations and then present the awards during full Council meetings at Shute End.