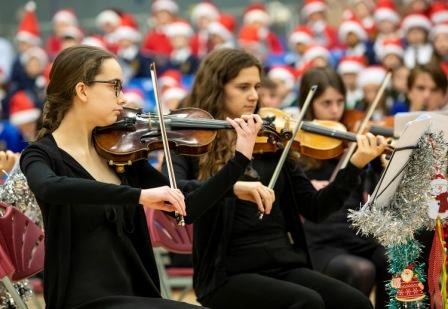 Some 400 angelic voices performed festive songs and carols including ‘We Three Kings’ and ‘No Room at the Inn,’ accompanied by Berkshire Maestros – an independent charity offering musical opportunities to children and young people.

The Borough Mayor traditionally chooses a charity to benefit from fundraising during his or her time in office. This year all proceeds from the event are going to the Me2Club charity, which helps children and young people with additional needs and disabilities take part in mainstream activities and clubs. Some £3,500 has so far been raised for the charity from this year’s concert.

“It was a truly wonderful – dazzling,” said Cllr John Kaiser. “I’d like to thank all the children, their families and teachers, for their efforts this year.

“I’d also like to thank the Berkshire Maestros Orchestra, for its continued support and outstanding musical performance. Lastly, I’d like to thank all the guests for their generosity. The Me2Club charity is very close to my heart and I’m thrilled for it to be able to benefit from the concert.”

The annual carol concert is usually held at Loddon Valley Leisure Centre but as this is currently being refurbished, Arborfield Green Leisure Centre was chosen as a stand-in. It is smaller than Loddon so the event was split with two performances on the day.