Do you have an event coming up in Wokingham? Click HERE to submit it for potential inclusion in the What’s on in Wokingham calendar.

It’s not every day that children get to meet and work with an author / illustrator that they know and love…and take a selfie. Wokingham Children’s Book Festival is bringing 23 talented and award winning authors to Wokingham Library and Town Hall for workshops and a whole load of fun that’s all associated with books.

With workshops like ‘From funny to strange and back again’, ‘Dragon’s have feelings too’, ‘Welcome to Witch Wars’, ‘Operation buried treasure’ and ‘oodles of doodles’ they definitely won’t be bored. 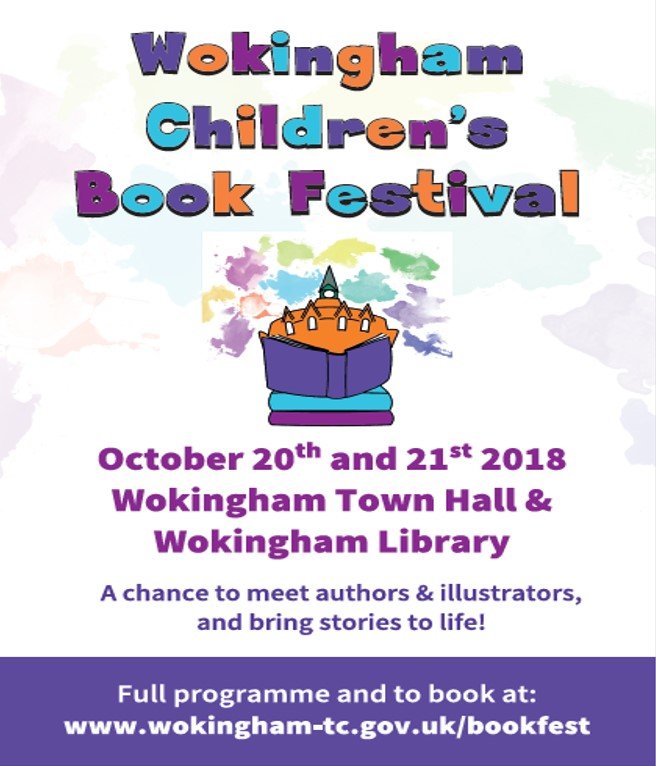 A taster of the award winning and popular authors who’ll be at the Book Festival:

Tony De Saulles is an award-winning children’s author and illustrator. He is the illustrator of the bestselling Horrible Science series, which has won many awards including The Blue Peter Prize For Best Book with Facts. To book tickets for Bee Boy with Tony De Saulles click here

A.F. Harrold is a poet, performer and children’s author who has written the prize-winningly funny Fizzlebert Stump series, the wonderfully strange (and prize-winning) novels The Imaginary and The Song from Somewhere Else and collaborated with former Children’s Laureate Chris Riddell on the decidedly daft poetry collection Things You Find in a Poet’s Beard.  To book tickets: From Funny to Strange and Back Again with A F Harrold

Geraldine McCaughrean has written about 170 books and had far too much fun ever to call it work.   She has been published in 41 languages and writes for every age level, from picture books to adult. Her awards include the Carnegie Medal, Whitbread Prize (three times), Guardian Fiction Award, Smarties, and The Blue Peter Book of the Year and “Best Book to Keep Forever”. Her last novel, Where the World Ends was shortlisted this year for the Carnegie.   To book tickets: Just Imagine! with Geraldine McCaughrean

Holly Webb started writing fifteen years ago while working as a children’s books editor, and wrote her first book mostly sitting on the floors of trains. Holly has now written over a hundred books, and her work is translated into thirty languages. Her most recent titles include The Rescued Kitten, The Hounds of Penhallow Hall and The Princess and the Suffragette.  To book tickets: Animal Stories with Holly Webb or The Princess and the Suffragette with Holly Webb

James Carter is OFFICIALLY the liveliest poet and guitarist in any town anywhere. An award-winning children’s poet, non-fiction and educational writer, he is the author of over 18 popular and best-selling poetry titles. James travels all over the UK and abroad with his guitar (that’s Keith) and melodica (that’s Steve) to give very action-packed poetry/music performances and workshops, and is a former lecturer in Creative Writing/Children’s Literature at Reading University.  To book tickets: Once upon a Star! With James Carter

Katrina Charman. In 2013 Katrina was the recipient of the SCBWI British Isles’ Margaret Carey scholarship for fiction, and in 2014 she was one of the winners of the SCBWI’s Undiscovered Voices competition. Katrina is the author of THE LAST FIREHAWK chapter book series, SURVIVAL TAILS , POPPY’S PLACE, THE NINJABREAD MAN and picture book CAR, CAR, TRUCK, JEEP.   To book tickets: Historical Fact and Fiction with Katrina Charman

Laura James’ love of storytelling began at an early age and led her to undertake a degree in Film Studies and an MA in Writing for Young People at Bath Spa University. The Adventures of Pug are based on the antics of her own very silly dogs, Brian and Florence. Together the three of them live in a tiny cottage just outside of Bath where they have lots of adventures and eat lots of jam tarts – all in the name of research of course! Laura’s first book, Captain Pug, was shortlisted for the Waterstones Children’s Book Prize in 2017.  To book tickets: Fabio the Flamingo Detective with Laura James

Laurel Remington is a writer of children’s, teen, and women’s fiction. Her debut novel, The Secret Cooking Club, was the winner of the Times/Chicken House Children’s Fiction Competition 2015. The follow-up, Confetti & Cake follows Scarlett’s further adventures. Her new novel The Polka Dot Shop was published in July 2018. Laurel’s novels explore the topics of family, friendship, and believing in yourself.  To book tickets: Designing a story with Laurel Remington

Layn Marlow is a local illustrator and author whose picture books have sold over a million copies worldwide and been translated into more than 20 languages. Her characters are known for their warmth and gentle humour and she uses traditional media (pencils, paints, inks and crayons) to produce illustrations with a classical, timeless quality. Layn’s latest book, A T-WIT FOR A T-WOO, is a collaboration with rising star in children’s writing, Charlie Farley. The two share a love of nature and of creating stories with characters at their heart.  To book tickets: A T-wit for a T-woo with Layn Marlow and Charley Farley

Sibéal Pounder previously worked for the Financial Times, where she researched the How To Spend It section and wrote the For Goodness’ Sake column – interviewing everyone from Veronica Etro to Vivienne Westwood. As well as Bad Mermaids, she writes about fabulous witches and feisty fairies in Witch Wars, her first and much loved series for Bloomsbury. Witch Wars has sold over 50,000 copies and was shortlisted for the Waterstones Children’s Book Prize and the Sainsbury’s Children’s Book Award.  To book tickets: Welcome to Witch Wars with Sibéal Pounder 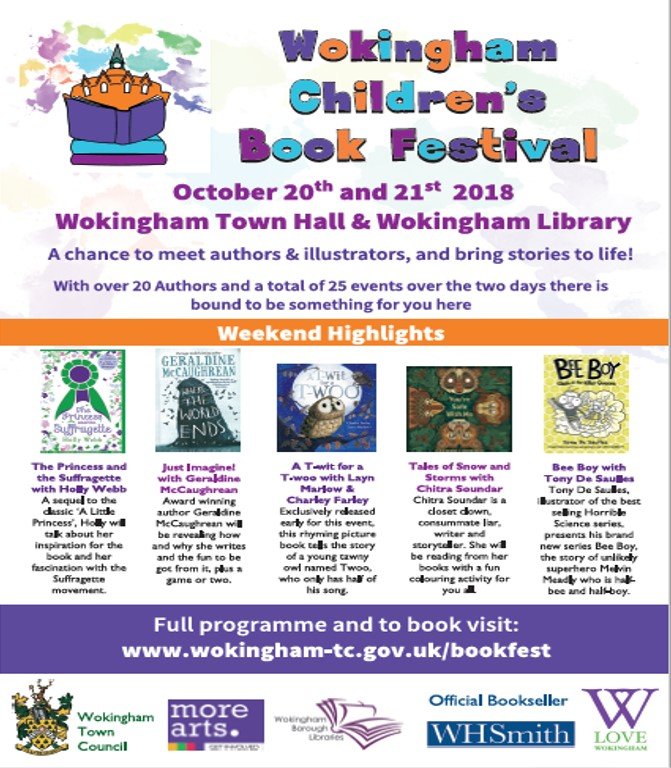 Booking is required, as spaces are limited. Books can be purchased on the day from the WH Smith’s stall at each location.  For details of who’s coming, fun workshops and booking information please go to: https://wokingham-tc.gov.uk/bookfest/

Submission of an event does not guarantee inclusion.