As chairman of the Wokingham Half-Marathon organising committee, Peter has worked tirelessly each year to organise the marathon since 1984. The event sees thousands come from all over to take part an also raises money for local charities. This year was his last year as organiser of the event. 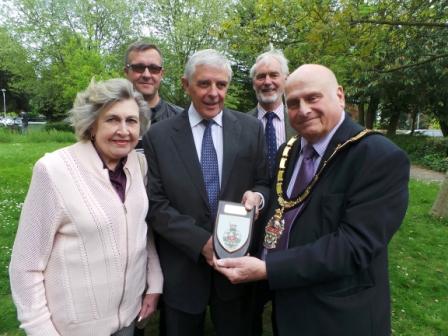 Peter, who resides in Wokingham, is also Chairman of the Wokingham Borough Sports Sponsorship Fund, which grants sports to young people who have excelled at sport, but not to the level where they are able to receive funding from national bodies. He was accompanied by his wife and son, who have both assisted Peter in the running of the Wokingham Half-Marathon, at the presentation.

Wokingham Borough Mayor, Cllr Rob Stanton said: “After more than 30 years of organising the popular Wokingham half-marathon, Peter had stepped down from his duties. It was a pleasure in my final month as Mayor to present him with a Mayor’s Award.

“The award is a fitting tribute to Peter’s contribution to both sport and the voluntary sector in Wokingham Borough over the past 32 years, including his work with the Wokingham Borough Sports Sponsorship Fund. I would like to personally take this opportunity to thank him for everything he has done to encourage and support others.”

The Mayor’s Awards are awarded throughout the year to a handful of individuals who have made a significant contribution to the community and the Wokingham Borough.