The first written mention of Wokingham was in 1146 and means ‘Homestead of the family or followers of a man called Wocca’. He was probably a Saxon lord who also farmed lands in Wokefield and Woking.
Wokingham received a Market Charter in 1227 which enabled it to hold a market every Tuesday a practice still continued to this day. 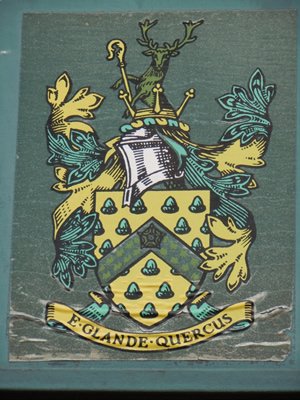 In the late 17th century the town was known as Oakingham meaning the “town of the forest” and this is where the acorns on the coat of arms are derived.

It is also reflected in the town motto E Glande Quercus meaning “from the acorn, the oak.”

In 1953 the former Borough of Wokingham was granted the Arms and in 1975 the Queen authorised that they could be used by the Wokingham Town Council.

The Arms consist of a field of acorns on a gold shield representing Wokingham as a forest town, an ermine chevron, a Tudor rose and a Saxon crown representing the Saxon origin of the district.

There is also a stag supporting a bishop´s crozier which refers to the Bishop of Salisbury who owned the land until 1574, when it became a Royal town. 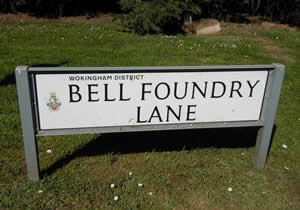 Wokingham was renowned for its Bell Foundry which operated from the mid-1300s until 1622. It was run by the Landen family during 15th century who marked their bells with the sign of a lion’s head. Many local churches and churches in the south of England still have Wokingham bells.

The industry however, relocated to Reading in the late 16th century and the only remnant left in the town is the name Bell Foundry Lane where, the Landen family were known to own a farm called Bell Founders Farm. The actual foundry was in Smyths Place in the centre of town behind Broad Street.

During the 16th century Wokingham became famous for its silk production. This was as a result of several Flemish weavers settling in the town after having been forced to leave their country to escape religious persecution and building up a successful silk industry.

During the reign of Queen Elizabeth I, Wokingham became particularly famous for its manufacture of hand knitted silk stockings and in 1625 an order existed that anyone residing in Wokingham and having no other trade should work in knitting. Some of the houses involved in the industry can still to be seen in Rose Street. 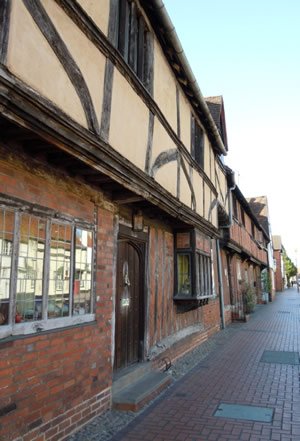 Due to cheap imports and the arrival of knitting machines in the 19th century the Wokingham silk trade rapidly declined and the last silk mill in the town, located in South Place off Peach Street, closed down after a fire in 1831.

In Victorian times brick production was one of the biggest industries in Wokingham. There were two major brickyards in the town. The largest was owned by Thomas Lawrence and was situated off Fishponds Road and a smaller one was in Oxford Road.

During the late 17th century William Heelas set up a linen drapery business in Wokingham which expanded over the years to cover most of the north side of the market place. In 1854 a second branch was opened in Reading which subsequently became part of the John Lewis Partnership in 1953.

In the 14th century the town consisted of Le Rothe Strete  (Rose Street), La Schete (Shute End), Peach Street and Le Don Strete  (Down Street later renamed Denmark Street). The High Street was where Broad Street and The Terrace are today and many of the Wokingham’s most historic buildings are situated in these locations. These include the 15th century Overhangs, in Peach Street and the timber framed buildings, some dating from the 14th century, in Rose Street.

One of the earliest houses in Wokingham is said to be at 15 The Terrace which is considered by its architectural style to have been built in the early 14th century.

One of the finest buildings in Wokingham are the almshouses, built in 1665, and named Lucas Hospital (a Grade I listed building) after their benefactor. The property was sold in 2001 and is now privately owned. Henry Lucas Hospital is Wokingham’s only Grade I Listed Building.

The old Guildhall in the Market Place, with its pillared undercroft, was built in 1612 and was replaced with the current Town Hall in 1858 after falling into disrepair. Housed beneath the Town Hall are the old cells and Police Constable’s quarters.

Among the 16th and 17th century buildings in Denmark Street is number 22 which is believed to be the site of the old Wokingham workhouse which housed up to 50 inmates. Although altered somewhere between the 17th and 18th century it still retains a small window (which was originally a door) said to be where bodies of the dead were lowered to the street to avoid the gaze of the inmates. In 1848 a new workhouse was built in Barkham Road capable of housing up to 250 people and this building now houses Wokingham Hospital. 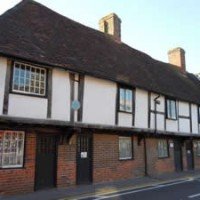 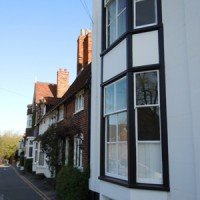 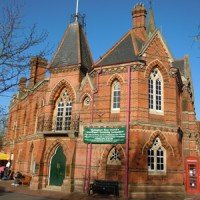 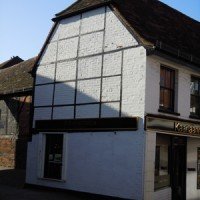 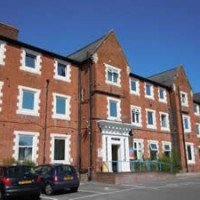 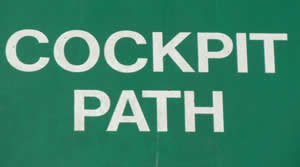 Cock fighting was a popular sport in Wokingham that was enjoyed by all classes. It originated in Greece and spread to Europe in the Middle Ages. Cock fighting involved pitting two male chickens against each other to fight to the death, the outcome of which was heavily bet on by the audience. There used to be a famous cock-pit at the end of Cock Walk which is known as Cockpit Path today. In the 16th century the term cockpit was also used to indicate a place of entertainment.

Bull baiting was In 1661 Wokingham butcher George Staverton, left a bequest in his will that a bull should be tethered in the Market Place and baited by dogs each year on St Thomas’ Day (21 December). The bull was kept in the yard of the Rose Inn which was opposite the market place, and was paraded through the town in the days leading up to the event. During the spectacle a number of dogs would be badly injured or killed and the bull eventually destroyed with the meat and leather being distributed amongst the poor people of the town.

Both these sports came to an end in 1835 when Parliament passed the Cruelty to Animals Act, which forbade the keeping of any house, pit, or other place for baiting or fighting any bull, bear, dog, or other animal. 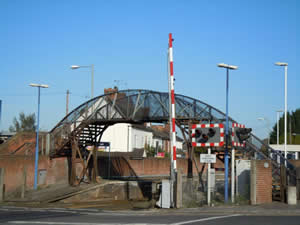 Up until 1849 there was a stage-coach service which ran between London and Reading and stopped at Wokingham. After this time the Reading to Guildford railway opened and passengers were able to travel to London via Reading. In 1856 the Staines to Reading line was completed affording a more direct service. In 1920 there was also a regular bus service through Wokingham run by The Thames Valley Traction Company.

In latter part of the 17th century the infamous gentleman highwayman Claude Duval plied his trade in the area robbing passing stagecoaches on their way to London from his base in Wokingham. Born in France in 1643 he reputedly never used violence and was a great hit with the ladies. He was finally caught and executed at Tyburn on 21 January 1670.

In the early part of the 18th century the Windsor Forest was home to the infamous Wokingham Blacks, so called because they disguised themselves by blacking their faces. From their base at William Shorter’s house in Wokingham they started off by poaching as a protest to the royal Hunt’s restrictions on farming and gathering rights but this also lead to blackmail, robbery and even murder. The problem became so widespread that in 1723, parliament passed a white paper, known as the Black Act, making it a criminal offence to undertake ‘blacking’, in order to commit unlawful acts.

During the civil war from 1634-1644 Wokingham was frequently raided by both the Cavaliers and Roundheads, for horses, livestock and food.  During this time over thirty buildings were burnt down, which accounted for about 20% of the town. Wokingham was left with a ruined economy which did not recover until the early part of the 18th century. 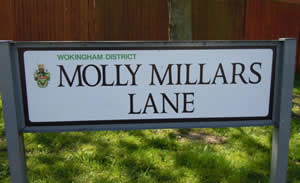 The town is famous for two Molly’s, the first being Molly Millar, reputedly the town witch who lived by the wayside and remembered today by the Lane which bears her name.

The second was Molly Mogg, daughter of the landlord and barmaid at the Rose Inn, which once stood in the market place. She was immortalised in the 1726 poem ‘Molly Mog, or the Fair Maid of the Inn’. The poem was written by John Gay in collaboration with Alexander Pope and Dean Swift whilst they were sheltering from a storm at the Rose Inn. Molly (or Mary as recorded on her death) Mogg never married and died a spinster at the age of 67 in 1766.

What hath been the cause of your woes,
Why you pine and you whine like a lover?
I’ve seen Molly Mog of the Rose.

Oh, nephew, your grief is but folly,
In town you may find better prog;
Half-a-crown there will get you a Molly,
A Molly much better than Mog.

I know that by wits ’tis recited
That Women at best are a clog,
But I’m not so easily frightened
From loving my sweet Molly Mog.

Will of wisp leaves the traveller gadding
Through ditch and through quagmire and bog.
But no light can set me a-madding
Like the eyes of my sweet Molly Mog.

For guineas in other men’s breeches
Your gamester will palm and will cog,
But I envy them none of their riches,
So I may win sweet Molly Mog.

The heart when half wounded is changing,
It here and there leaps like a frog.
But my heart can never be ranging,
‘Tis so fixed upon sweet Molly Mog.

Who follows all Ladies of pleasure
In pleasure is thought but a hog.
All the sea cannot give so good measure
Of joys as my sweet Molly Mog.
If I would not give up the three Graces
I wish I were hanged like a dog,
And in court all the drawing-room faces,
For a glance of my sweet Molly Mog.

Those faces want nature and spirit
And seem as cut out of a log;
Juno, Venus and Pallas’s merit
Unite in my sweet Molly Mog.

Those who toast all the family Royal
In bumpers of hogan and nog,
Have hearts not more true or more loyal
Than mine to my sweet Molly Mog.

Were Virgil alive with his Phillis,
And writing another eclogue,
Both his Phillis and fair Amaryllis
He’d give up for sweet Molly Mog.

While she smiles on each guest like her liquor,
Then jealousy sets me agog,
To be sure she’s a bit for the Vicar,
And so I shall lose Molly Mog.

I feel I am in love to distraction,
My senses all lost in a fog,
And nothing can give satisfaction
But thinking of sweet Molly Mog.

A letter when I am indicting,
Comes Cupid and gives me a jog,
And I fill all the paper with writing
Of nothing but sweet Molly Mog.