A teacher and a community champion are the first recipients in the new Wokingham Borough Mayor’s Roll of Honour awards for outstanding commitment and contributions to the area.  Sukhdev Kaur Bansal from Wokingham, and Janet Woodruff from Shinfield were presented with this prestigious award by Borough Mayor Cllr John Kaiser at Thursday night’s (September 20) full Council meeting. 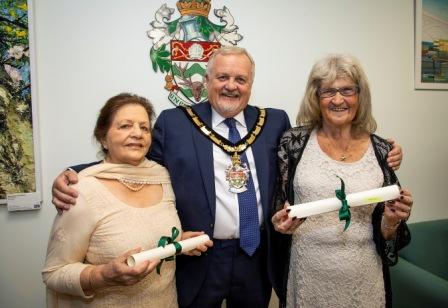 Sukhdev, a qualified teacher, voluntarily has been running Panjabi language classes for adults and children for 35 years after realising the importance in the community to retain its own culture.  Creating the idea, she turned her ambitions into reality.

Supported by Ramgarhia Sabha Reading, classes are held Friday evenings during school term at Maiden Erlegh School. Those attending are taught up to GCSE level, and success has been celebrated every year with more than 150 children achieving Panjabi GCSEs with outstanding grades. There are currently 50 children attending classes. She has also worked with schools, scouts and other groups in the area to teach more about Sikhism.

Baldev Sian, president of Ramgarhia Sabha Reading, nominated Sukhdev “for the great success story that will be pretty difficult to emulate, and for the sheer passion, determination and tenacity, and of course dedication to serve the communities in Wokingham.”

The other award recipient Janet Woodruff, is a very active member in the Shinfield community. Janet distributes community newsletter from the Community Flat, and Loddon Reach from Shinfield Parish Council, to residents on the Shinfield Rise estate every six to eight weeks come rain or shine.

She has also supported many borough council activities run on the estate by either encouraging people to attend or assisting in the event’s running.

Janet was nominated by Zoran Matic, community engagement officer at the borough council, for her “very positive and proactive approach. She’s always keen to lend her assistance wherever it is needed. She’s a person that almost everyone in her community knows through her pleasant and helpful attitude.”

Cllr John Kaiser, Borough Mayor, said:  ““Wokingham Borough is full of fantastic people who make our communities special.  I’m honoured to acknowledge the effort and contributions Janet and Sukhdev make to others. They volunteer tirelessly to make a real difference and this recognition is thoroughly deserved.”

Any borough resident can be nominated for the award.  “We are looking for people who make that extra effort for others,” said Cllr Kaiser. “Maybe by fostering, volunteering or being a carer; there are many thousands of such people out there and we need to hear about them. For children and young people, we would like to hear about those who have overcome adversity.”

To nominate somebody, all you have to do is email the mayor’s office at: mayoralsupport@wokingham.gov.uk. Nominations (which can only be made by Wokingham borough residents) should be no longer than 200 words and set out why the nominee should be considered for the award. For the children’s awards, outstanding achievements in sport or arts will be considered.

Each month Cllr Kaiser and his deputy mayor Cllr Bill Soane will select worthy winners from those people nominated by members of the public. There will be children’s and adults’ categories and each winner will receive a lapel badge and scroll to mark their achievements.